Israeli soldiers detain Palestinian residents in the village of Yabad near the occupied West Bank city of Jenin on May 12, 2020. (Photo: AFP / Jaafar Ashtiyeh)

Ramallah, May 13, 2020—Three senior United Nations officials on Monday called for the immediate release of all Palestinian children detained in Israeli prisons and detention centers due to heightened risk of the novel coronavirus (COVID-19).

A joint press statement released on May 11 by Jamie McGoldrick, Humanitarian Coordinator in the Occupied Palestinian Territory; Genevieve Boutin, UNICEF Special Representative in the State of Palestine; and James Heenan, Head of the United Nations Human Rights Office in the Occupied Palestinian Territory, declared, “[t]he best way to uphold the rights of detained children amidst a dangerous pandemic, in any country, is to release them from detention and to put a moratorium on new admissions into detention facilities. We call on the Israeli and Palestinian authorities to do so immediately.”

The three officials expressed serious concern over the continued detention of Palestinian children by Israeli authorities amid the pandemic and noted children in detention face heightened risk of contracting COVID-19, with physical distancing and other preventive measures often absent or difficult to achieve.

Since the COVID-19 crisis began “legal proceedings are on hold, almost all prison visits are cancelled, and children are denied in-person access to their families and their lawyers” creating “additional hardship, psychological suffering, and prevent[ing] the child from receiving the legal advice to which they are entitled,” UN officials said.

“There is no way Israeli prison authorities can ensure the health and well-being of Palestinian child detainees as long as they continue to be in a custodial detention setting,” said Ayed Abu Eqtaish, Accountability Program director at DCIP. “Israeli authorities must immediately release all Palestinian children in Israeli custody.”

Globally, the World Health Organization, the Office of the United Nations High Commissioner for Human Rights, and UN human rights experts have all issued guidelines and statements highlighting the need to prevent the spread of COVID-19 in detention settings.

On March 19, Defense for Children International - Palestine called on Israeli authorities to take immediate action to release all Palestinian child detainees in Israeli prisons due to the rapid global spread of the COVID-19.

In April, DCIP highlighted that the number of Palestinian child detainees in Israeli prisons and detention centers increased by six percent since January despite the COVID-19 crisis and widespread calls to decrease the number of people in custodial detention globally.

Data from a headcount on March 31 released by the Israel Prison Service (IPS) shows that only 28 percent of Palestinian children in Israeli custody were serving sentences, and over 60 percent (117 out of 194) were held in pre-trial custodial detention. At least 140 Palestinian children were detained in prisons located inside Israel, amounting to a grave breach of international law.

Children detained at Israel’s Megiddo prison told DCIP this month they were held in small, shared rooms with four to six other child detainees. Children reported they were not provided with information on how to prevent the spread of the novel coronavirus and noted the IPS implemented restrictions to limit recreation time and access to proper hygiene and sanitization products. At least 54 children were detained at Megiddo prison at the end of March. 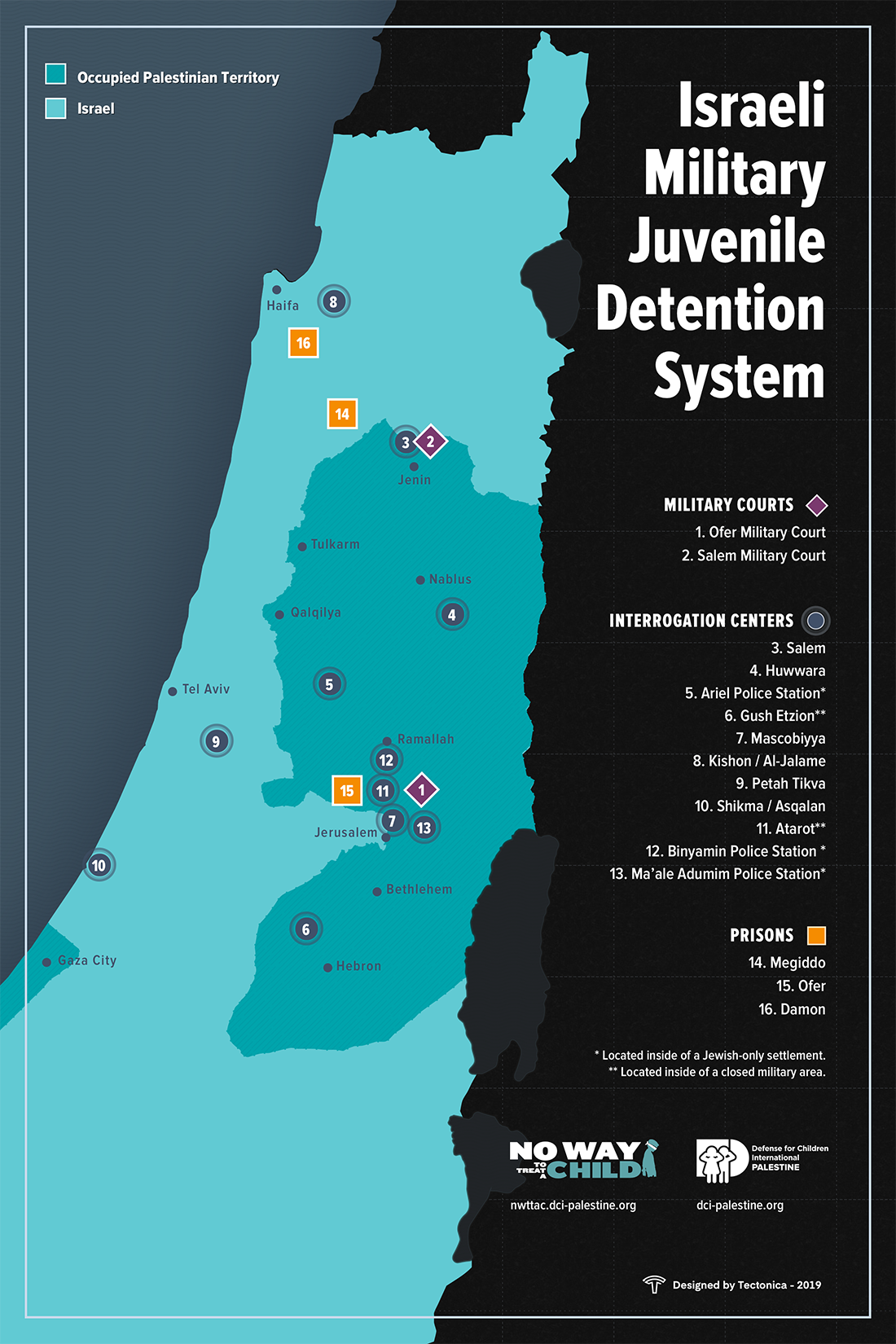 Palestinian children in Israeli prisons and detention centers have no right to regular phone calls. However, following a recent petition to Israel’s High Court of Justice Israeli authorities announced during an April 2 hearing that the IPS issued a temporary order allowing Palestinian child detainees to talk with their families by phone for 10 minutes once every two weeks for the duration of the COVID-19 crisis, according to the Israeli human rights organization HaMoked.

However, it appears the IPS did not implement the order in practice as children recently released from Megiddo prison told DCIP they were not allowed access to phones to call their families. Last week, HaMoked sent a letter to Israeli authorities demanding they immediately implement the order, noting families of children detained at Ofer prison had not received any phone calls from their children in over a month since it was issued.

The U.N. Committee on the Rights of the Child, an independent body of experts that reviews compliance with the U.N. Convention on the Rights of the Child (CRC), called on governments in early April to “[r]elease children in all forms of detention, whenever possible, and provide children who cannot be released with the means to maintain regular contact with their families.”

Israel ratified the CRC in 1991, obligating itself to implement the full range of rights and protections included in the treaty, including that the best interests of the child shall be a primary consideration in all decisions affecting children, and detention must only be used as a measure of last resort for the shortest period of time necessary.

Israel has the dubious distinction of being the only country in the world that automatically and systematically detains and prosecutes children in military courts that lack fundamental fair trial rights and protections. Israel detains and prosecutes between 500 and 700 Palestinian children in military courts each year. Nearly three out of four Palestinian children detained by Israeli forces experiences some form of physical violence, according to documentation collected by DCIP.