The No Way to Treat a Child campaign seeks to challenge and end Israel's prolonged military occupation of Palestinians by exposing widespread and systematic ill-treatment of Palestinian children in the Israeli military detention system. It is a joint project of Defense for Children International - Palestine and American Friends Service Committee.

The No Way to Treat a Child campaign is committed to securing a just and viable future for Palestinian children living in the Occupied Palestinian Territory, and envisions a world where all children attain rights in accordance with the UN Convention on the Rights of the Child and other international standards.

The No Way to Treat a Child campaign implements an integrative approach that incorporates the use of the international human rights framework and movement building to advance the rights and protection of Palestinian children.

The No Way to Treat a Child campaign seeks to challenge and end Israel’s prolonged military occupation of Palestinians by organizing and supporting an extensive network of people demanding immediate protections for Palestinian children held in Israeli military detention where ill-treatment and torture is widespread, systematic, and institutionalized.

From testimonies of 641 Palestinian children detained by Israeli forces from the occupied West Bank and prosecuted in Israeli military courts between 2015 and 2019, DCIP found that: 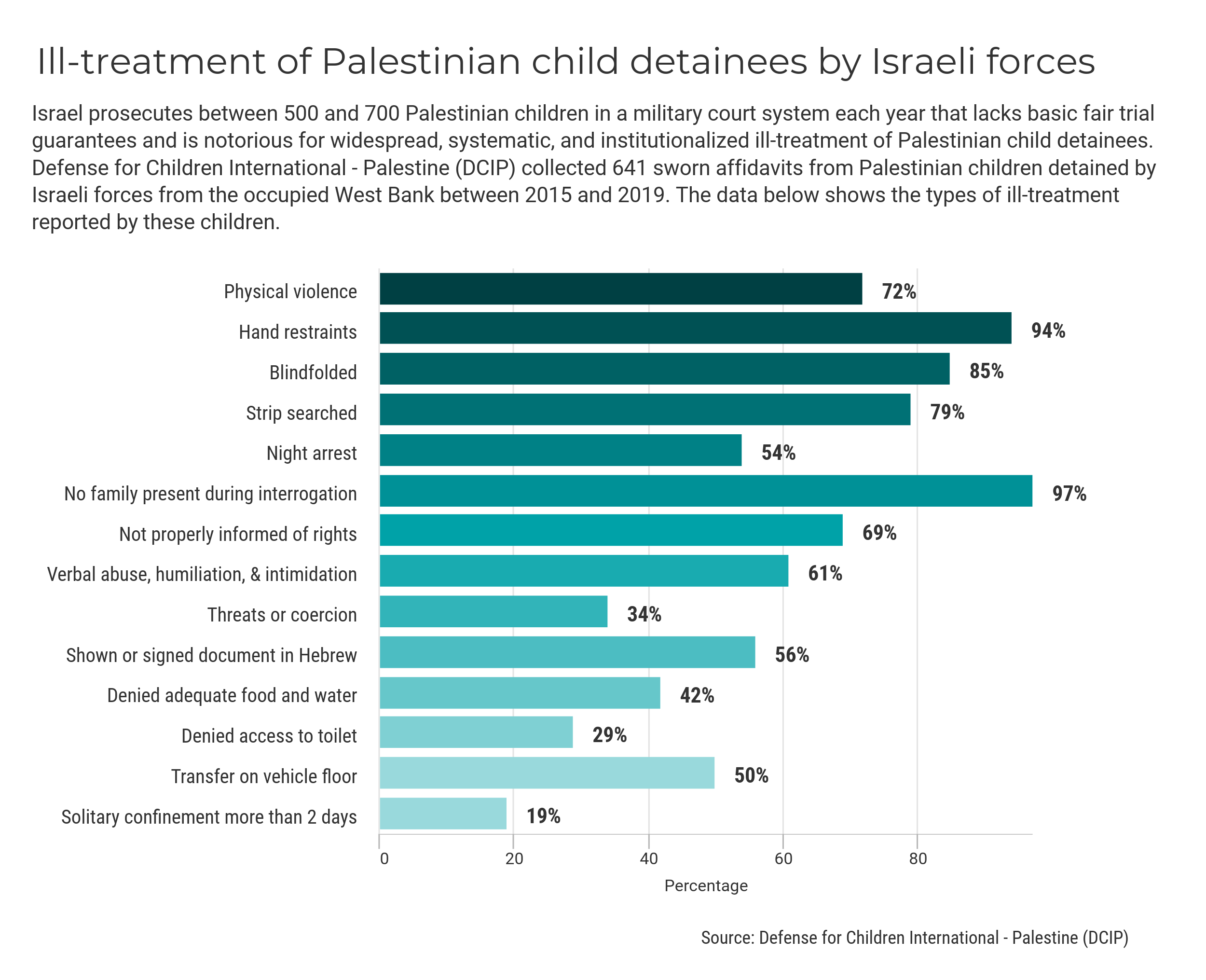 Since 2000, an estimated 10,000 Palestinian children have been detained by Israeli forces from the occupied West Bank and held in the Israeli military detention system.

Despite sustained engagement by UNICEF and repeated calls to end night arrests and ill-treatment and torture of Palestinian children in Israeli military detention, Israeli authorities have persistently failed to implement practical changes to stop violence against child detainees.

In no circumstance should children be detained or prosecuted under the jurisdiction of military courts. However, as a minimum safeguard, while Palestinian children living under Israeli military occupation continue to be arrested and prosecuted within the Israeli military court system, Israeli authorities must respect and ensure basic due process rights and the absolute prohibition against torture and ill-treatment. From the moment of arrest, operations and procedures must be carried out in accordance with international juvenile justice standards, specifically the UN Convention on the Rights of the Child, including:

The No Way to Treat a Child campaign is coordinated by American Friends Service Committee and Defense for Children International - Palestine, and includes a network of autonomous organizations committed to shared decision making to influence U.S.-based audiences and decision makers in an effort to end Israeli military occupation and secure a just and viable future for Palestinian children living in the Occupied Palestinian Territory where all children attain rights in accordance with the UN Convention on the Rights of the Child and other international standards.

About Defense for Children International - Palestine

Defense for Children International - Palestine is an independent, local Palestinian child rights organization based in Ramallah dedicated to defending and promoting the rights of children living in the West Bank, including East Jerusalem, and the Gaza Strip. For over 25 years, we have investigated, documented and pursued accountability for grave human rights violations against children; held Israeli and Palestinian authorities accountable to universal human rights principles; and advocated at the international and national levels to advance access to justice and protection for children. We also provide direct legal aid to children in distress. For more information visit www.dci-palestine.org.

About the American Friends Service Committee

The American Friends Service Committee (AFSC) works for policies that reflect a cooperative search for solutions to protect our planet, reduce violent conflict, advance social justice, and meet global needs. Since 1948, AFSC has worked with Palestinians, Israelis, and the international community to realize a just and lasting peace between Palestinians and Israelis. In the United States AFSC works to educate audiences about Israel and the occupied Palestinian territory and supports activist efforts to change government policies and corporate/institutional practices that support inequality and the ongoing Israeli occupation of the Palestinian territory. AFSC also supports the implementation of international humanitarian and human rights law in Israel and the occupied Palestinian territory, promotes the implementation of Palestinian refugees’ right of return, and calls for full equality between Palestinians and Israelis.