Approximately 3 million Palestinians live in the occupied West Bank, of which around 45 percent are children under the age of 18.

Military law has applied to Palestinians in the West Bank since 1967, when Israel occupied the territory following the Six Day War. Jewish settlers, however, who reside within the bounds of the West Bank, in violation of international law, are subject to the Israeli civilian legal framework. Accordingly, Israel operates two separate legal systems in the same territory. Palestinian children who live in Jerusalem generally fall under Israeli civilian law.

From testimonies of 681 Palestinian children detained by Israeli forces from the occupied West Bank and prosecuted in Israeli military courts between 2016 and 2021, DCIP found that: 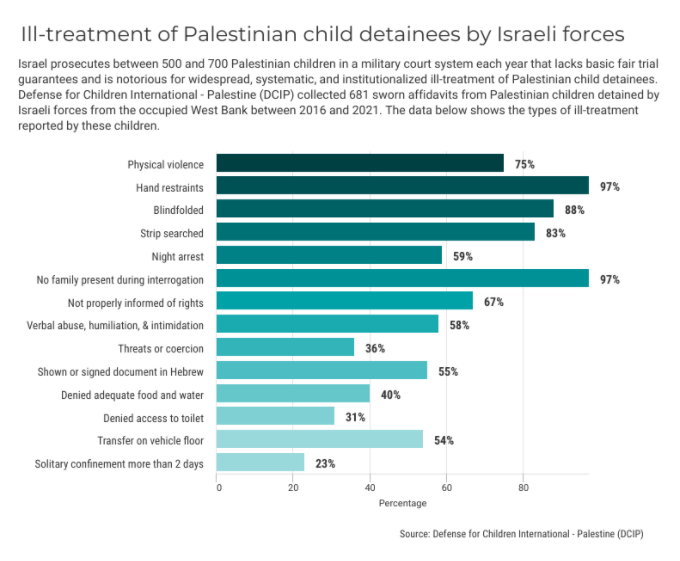 Since 2000, an estimated 13,000 Palestinian children have been detained by Israeli forces from the occupied West Bank and held in the Israeli military detention system.

Despite sustained engagement by UNICEF and repeated calls to end night arrests and ill-treatment and torture of Palestinian children in Israeli military detention, Israeli authorities have persistently failed to implement practical changes to stop violence against child detainees.

Legislative Advocacy
JOIN THE CAUSE