How to talk to your representative about Palestinian child detention

Chicago, June 16, 2017—For the past two years, AFSC has partnered with Defense for Children International – Palestine on a campaign to challenge Israel’s prolonged military occupation of Palestinians by exposing the widespread and systematic ill-treatment of Palestinian children arrested by Israeli forces.

Our education and advocacy campaign “Israeli Military Detention: No Way to Treat a Child” has engaged policymakers in Washington, D.C. by hosting congressional briefings, supporting congressional “Dear Colleague” letters, delivering petitions, and mobilizing supporters in advocacy through videos and other resources. 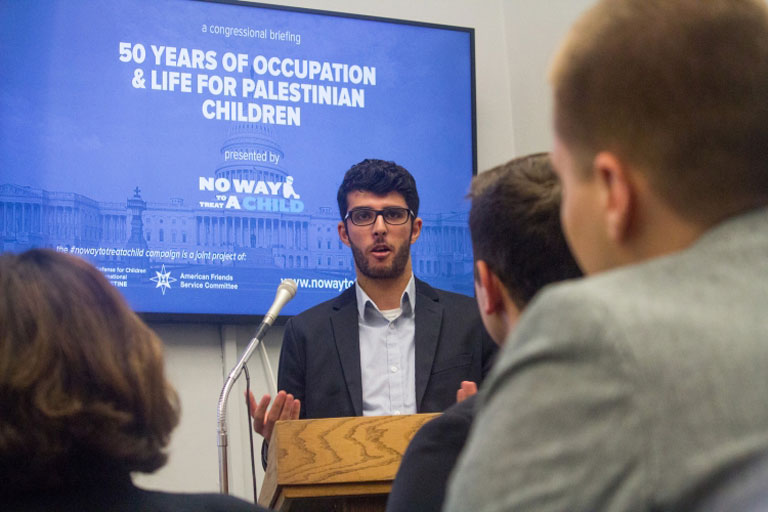 At a packed Congressional briefing in June, Yazan Meqbil shared how Palestinian child detention has affected his life and those of his family members and friends in the West Bank. (AFSC / Carl Roose)

The No Way to Treat a Child campaign educates the public about the practice and impact of Israeli military detention on Palestinian children and encourages U.S. officials to hold Israel accountable for its ongoing violations of human rights against children.

You can be part of our efforts. Through our work, we have found the following messages to be effective in talking with members of Congress about Palestinian children in Israeli military detention. We encourage you to use them to communicate with your elected officials—whether in person, phone calls, emails, or letters.

1. Children are the future. They also are the present.

All societies value their children and build their dreams and hopes for a better future around their youth. In the occupied Palestinian territory, where children under 18 make up nearly half of the population, this is also true. These Palestinian children are not only the future, they are also the present and their rights are being violated when they are detained and tried in the military court system. When it comes to children--whether or not they have committed an alleged offense--international law demands that detention must be used as a measure of last resort and for the shortest amount of time. The best interests of a child must be a primary concern. 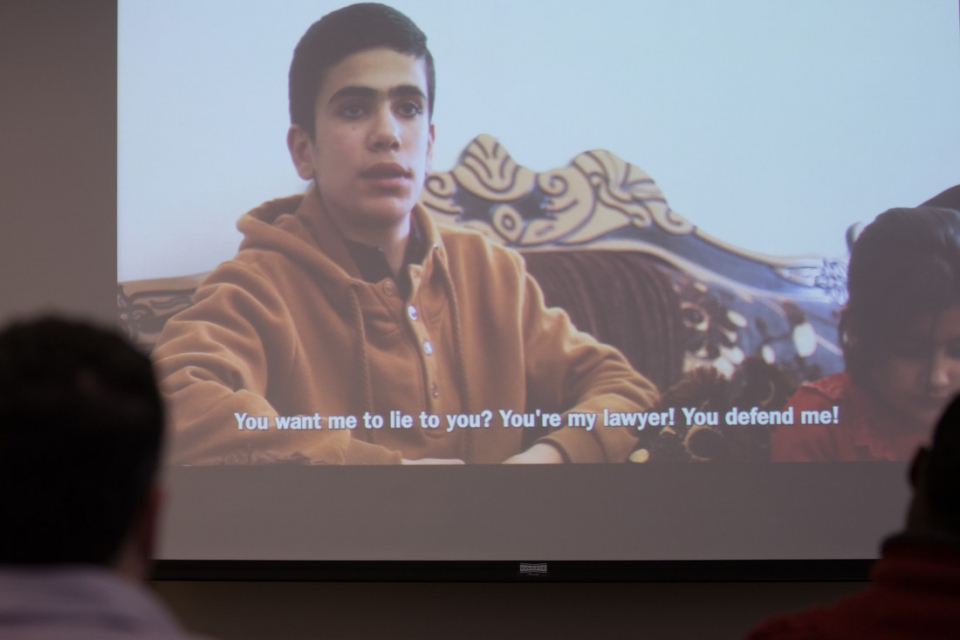 A scene from the "Detaining Dreams" documentary produced by the No Way to Treat a Child campaign. (AFSC / Don Davis)

2. Two sets of laws exist: one for Palestinians, another for Israelis. Even on the same land.

In the occupied West Bank, there are two separate legal systems operating in the same territory. The sole factor in determining which laws apply to a person is their nationality and ethnicity. Israeli military law, which denies people their fundamental rights, is applied to the entire Palestinian population—while Israeli settlers living in the West Bank are subject to the Israeli civilian and criminal legal system. No Israeli child comes in contact with the military court system.

3. Abuse in the military court system is widespread, systematic, and well documented. Military courts are not about providing justice.

For over a decade, the U.S. State Department has documented the ill treatment of Palestinian child detainees in its annual human rights country report on Israel and the occupied Palestinian territory.

Three out of four children arrested experience physical violence during arrest or interrogation by Israeli soldiers. Children are often arrested in night raids on their homes--blindfolded and hand tied, denied access to lawyers and their parents during interrogation, coerced into signing confessions, convicted in military courts, and imprisoned in detention centers, often inside Israel outside of the occupied West Bank, which makes it difficult for family to visit. In 2016, Israeli authorities increasingly used solitary confinement for interrogation purposes, a practice amounting to torture under international law.

Over 90 percent of Palestinian children taken to military court are convicted.

4. The U.S. government is not a neutral player on this issue, but could make a positive difference.

In recent years, members of Congress have publicly stated their concern for the rights of Palestinian children:

U.S. military assistance to Israel has helped to sustain the military occupation and undermined the long-term security interests of both Israelis and Palestinians—and that must change. In September 2016, the U.S. agreed to give Israel $38 billion in military assistance over the next decade (fiscal years 2019-2028), the largest such aid package in U.S. history.

Realizing a just and lasting peace will require accountability. Continued U.S. military assistance to Israel will only maintain the status quo and Israel’s military occupation, including the abuse and detention of Palestinian children.

Toolkits
JOIN THE CAUSE